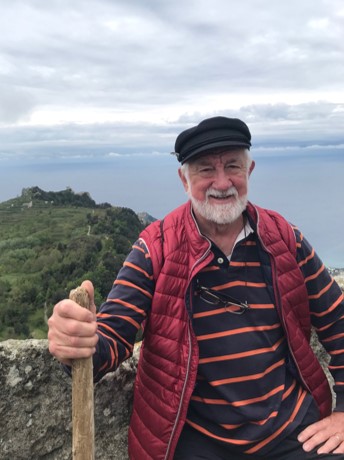 Pat James is currently Adjunct Professor at the University of South Australia (UniSA) STEM (Science, Technology, Engineering and Mathematics) and an Honorary Research Associate with Nature Foundation South Australia (NFSA). From 1975-2004 he was an academic in Structural Geology at Adelaide University in many areas of geoscience research and had a long involvement in the promotion of geoscience education and outreach.. Pat became Foundation Professor and Head of the School of Natural and Built Environments at UniSA in 2004, took a part-time role developing an online engineering degree for OUA and retired in 2014. Latterly these roles left decreasing time for geological, and in particular, fieldwork.

More recently Pat renewed his interests in the application of geodiversity, geoconservation and geotourism principles jointly with UniSA and NFSA. This involved remote fieldwork, development of geotrails, with field guides, brochures and virtual reality websites for their Witchelina and Hiltaba Reserves in outback SA.

In developing a National Geotourism Strategy for Australia, the Australian Geoscience Council has recognised that state-based geotourism maps can be supplemented by publications, as well as consideration of new ICTs (e.g. smartphones, 3D visualisation, augmented reality and virtual reality) and GIS technologies as a cost effective means of accessing and better communicating geological content for tourists throughout regional Australia.

Several groups have formed in Australia to trial these technologies with a view of realising some commercial opportunities with geotourism in mind. In South Australia the Geological Society of Australia has developed field guides for many areas of outstanding geological significance e.g. Hallett Cove, the Flinders Ranges and Victor Harbor amongst the set of 10 guides produced so far, https://www.gsa.org.au/Public/Publications/Field_Guides/

The Geological Survey of South Australia is likewise producing interactive, online Google Earth-based, Discovery Trails as virtual geotours https://discoverytrails.sarig.sa.gov.au/ while at the University of South Australia the Project LIVE (Learning though Immersive Virtual Environments) http://projectlive.org.au/ initiative is highlighting some significant outback areas with interactive virtual geotours, including drone and field video recording, 360 degree GigaPan panoramas and a range of other interpretive materials.

Danxiashan UNESCO Global Geopark of China has been working closely with DJI Technology, the world’s largest manufacturer of aerial photography systems, in applying drones to locate, identify, map and monitor geohazards, bush fire, illegal land use, forest clearance and vegetation growth in the geopark. It is cost and time effective particularly in the preliminary survey of a large area.

These technologies will impact on future geotourism/ecotourism product development.