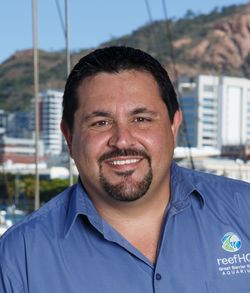 Mr Fred Nucifora holds a Bachelor of Education. Fred has worked at the Authority since 2001, he was the Director of ReefHQ Aquarium for ten years. After studying education at James Cook University with majors in biophysical geography and marine biology Fred gained a position teaching senior geography and biology at Ignatius Park College, Townsville. Fred’s first real involvement in environmental education was when he took on the role as the school based coordinator for the G.L.O.B.E (Global Learning and Observations to Benefit the Environment) program, an initiative of the then Vice President of the United States, Al Gore. It was from this moment on that Fred wanted to focus on education for environmental sustainability. Fred joined the Great Barrier Reef Marine Park Authority as its Senior Education Officer in 2001, this career move gave him the opportunity to focus on two of his passions in life, the marine environment and education. The establishment and implementation of the Reef Guardian Schools Program and growth of Reef Videoconferencing nationally and internationally have been two highlights. Since 2018 Fred has led the Education Stewardship and Partnerships section of the Great Barrier Reef Marine Park Authority.